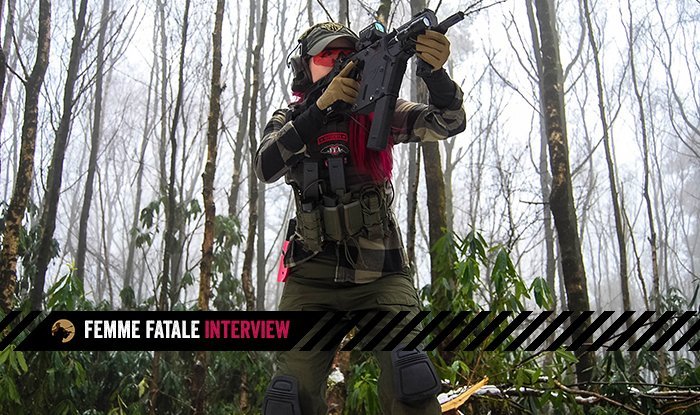 When we realized we hadn’t interviewed any female airsoft players yet, the first person that came to mind as a possible interviewee was Kelly «Femme Fatale». As soon as we learned that she was going to participate in Warzone 6, we decided to contact her and «annoy» her with a few questions. Turns out she is not THAT lethal! Enjoy!

1) Please introduce yourself to our readers, and tell us how you entered the Airsoft “realm”. What is the best part of Airsoft for you?

My name is Kelly and I’m the founder and owner of Femme Fatale Airsoft – the worldwide leading women’s airsoft blog. I am a 26 year old traveller, dream chaser and digital nomad who makes her living as a full-time airsoft and tactical kit blogger/ writer travelling the world visiting airsoft sites and events.

​I have been actively playing airsoft for almost 4 years! I am a CQB girl at heart who loves to dabble in MilSim. Although my very first airsoft game was in February of 2011, I actively started playing in August 2014 after I attended a private Skirmish with some friends for a birthday event, since that day I have become absolutely hooked on this sport and it has gone from being my hobby to my career. From playing once a month at a local site to travelling internationally to play airsoft sites and attend events all over the globe, in 2017 alone I visited Germany, USA, Taiwan and France to play, along with sites up and down the UK every weekend in between!

Femme Fatale Airsoft was born in November 2014 shortly after I was made redundant from my job as a Fashion Buyer/Merchandiser and was involved in a car accident around the same time – 2 days later in fact! FFA was originally something to pour my spare time into whilst I was down on my luck, however, in the short 4 years this blog has been live, it has well and truly changed my life. In January 2017, I quit my job to work on FFA full time.

I created FFA because whilst I was scouring the internet for information geared towards women in airsoft I noticed a gap in the information available online and decided that needed to change! My goal is to and always will be to encourage/support female players and to get more women into the game by making airsoft more accessible through information available to them in online content! In 2015 I became the first female contributor to Airsoft Action, and in 2018 I became the first female contributor to PMCI magazine. Femme Fatale Airsoft has gone on to become the worldwide leading women’s airsoft blog and was voted Player of the Year 2017 in Popular Airsoft’s 8th Player Choice Awards and Best Airsoft Blog/News Website in Airsoft International’s Industry Awards 2018. It is by far my proudest achievement and I am so grateful to be able to create content about a sport I love full time thanks to my amazing followers. 2) You recently participated in Warzone 6. How did you find out about Warzone and how was it for you to participate in it this year?

I found out about Warzone 6 through my dear friend and fellow Airsoft Action writer Bill – he had been talking to Stelios from Warzone and we were invited to attend Warzone 6 in May 2018! Warzone 6 was an immensely fun and testing game, over the weekend I made so many new friends within the Greek airsoft community and got to experience some of the best of Greek airsoft. I had the chance to play a role that was new to me – medic and I learned a lot from this – mainly, medics can’t go charging and trying to kick doors in because if you get shot first, your squad is pretty f*cked haha. Playing the peace keeping UN was also a learning curve, as an avid OPFOR player, I love causing havoc and starting firefights for the crack so playing a peace keeping role was entirely new to me. Our time in Crete was fantastic, and that’s thanks to the players. Huge thank you to our host Stelios for opening his home and battle wagon to us, to Nikolas for translating and for showing the Brits a good time, to Thomai and Manousos for translating and looking after us during the game and of course to Kostas for letting me sleep in the car when the snoring in the tents became too much! The UN team were a fantastic group who made us feel so welcome. I can’t wait to see you all again, and hopefully repay the kindness and hospitality.

3) Have any women, over the years, frowned upon you for playing the «manly» hobby of Airsoft?

I’ve never been frowned upon by women for playing airsoft, some of my female friends don’t understand why I love it so much but they know it makes me happy. I have received pushback from men for being too feminine – being 5”3 and weighing in at just under 55 kg, I am tiny and I find myself constantly underestimated, but I live for that, being underestimated is one of the most powerful positions you can be in. When your opponent underestimates your ability, strength and aggression it only makes them less prepared, it’s important to expect anything. 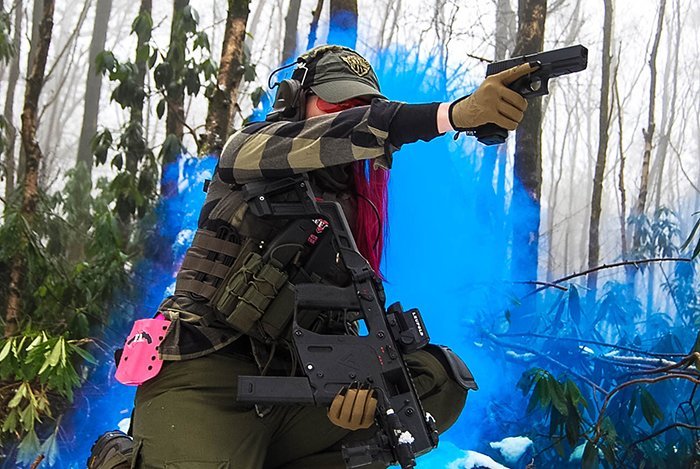 4) What are your Airsoft plans for this year? Any other major Airsoft event you intend on joining?

Now that airsoft is my full-time job, my schedule is jam packed full of events – from marshalling, skirmishes, MilSims and of course fairs. This summer I’m hoping to go back to Paris, France to visit my French airsoft family. My confirmed big events for this year are: the National Airsoft Festival at Ground Zero Airsoft (the biggest airsoft event in the UK with around 2500 players) in August, Tora Bora Raid 2 at Camp Zero Airsoft and Urban 6 Airsoft’s Gangster City: Retribution in September and finally Stirling Airsoft’s England Vs Scotland in December. I will then be travelling back to the US in January for SHOT Show and to see my American baes.

5) Tell us about your Airsoft gear and camouflage colour of your choice.

When I first started playing I was ALL about MutliCam (or Multiglam as I like to call it) but over the years I’ve been playing I’ve transitioned to green camouflage patterns and tactical kit through my love of playing OPFOR – I love the freedom playing OPFOR gives you. My favourite camouflage patterns to wear right now are: MultiCam Tropic and Crye Ranger Green. For my go-to tac kit, I usually run a cap with earpro, Wiley X shooting glasses and a half mesh mask for eye and face protection, my favourite plate carrier is my LBX Tactical 0300S in MAS Grey which I’ve accessorised with some HSGI taco pouches and my battle belt is the FRV tailoring cobra shooters belt that I’ve loaded up with Kydex gear for a lightweight and effective set-up. 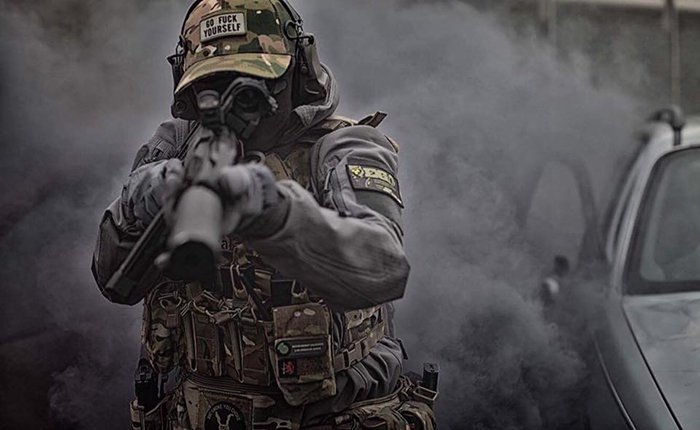 6) Any tips for getting more girls into playing Airsoft?

Be encouraging, talk about airsoft passionately, offer advice/guidance and show them that other women play. I can’t tell you how important it was for me when I started to see other women on social media playing airsoft, and ladies joining the sport now have so many more active female players on social media to connect with.

7) Did you ever feel discriminated against by other airsoft players? In Greece there’s a lack of female players, does the same apply for your country?

When I first started playing in 2014 it was still a rarity to see women at airsoft games – more often than not I would be the only girl and because airsoft at the time was still considered a ‘man’s game’ I received a lot of pushback from men, most of it on social media and I think I have heard it all – from not being ‘MilSim’ enough, to not being good enough to be another high profile player’s CO to comments about my appearance. As I gained traction on social media and I began travelling the UK and the globe to play different airsoft sites I began to build a reputation around me. It is very rare now for me to receive any negative comments now but when I do, I just shrug them off – I’ve worked hard to build Femme Fatale Airsoft and I’m here to stay.

8) Which type of field do you prefer and why? (Urban, woodland etc.)

My favourite type of field to play is definitely CQB. I love the close proximity as it really gets my adrenaline going and I love the fear. CQB constantly challenges me to play harder and faster – to go through the door first, to push up and to shoot first to get the drop on my opponents. 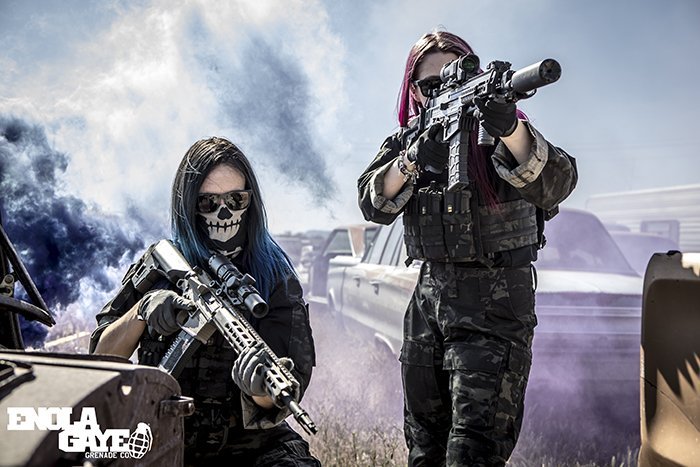 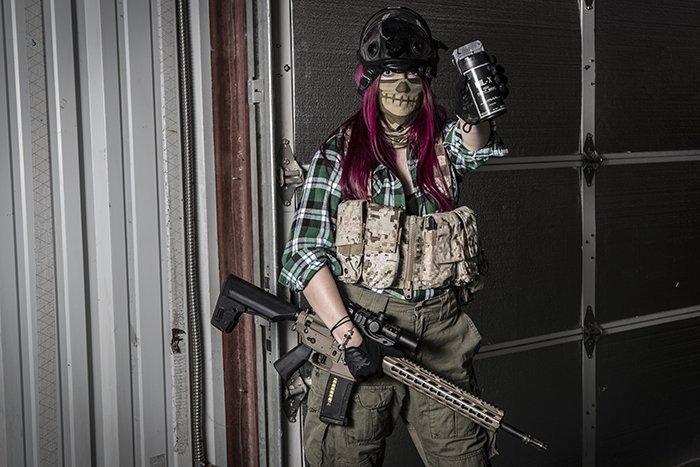 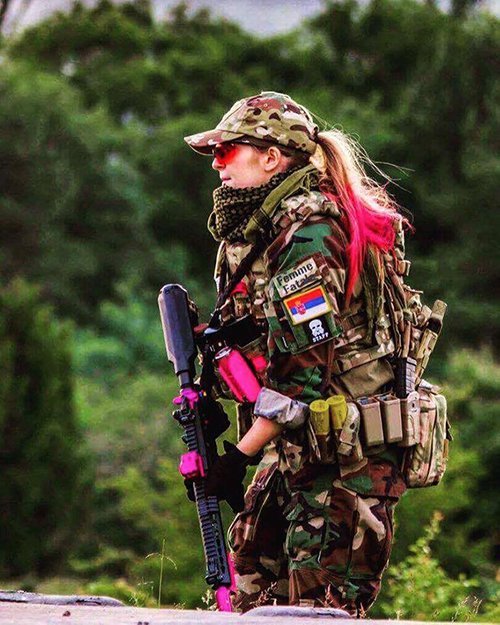 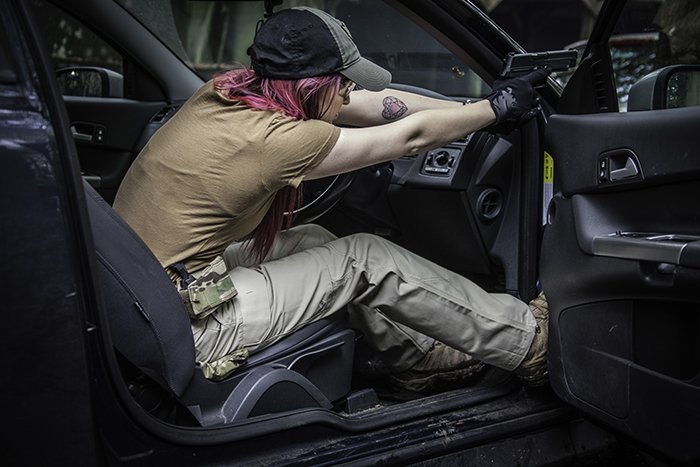 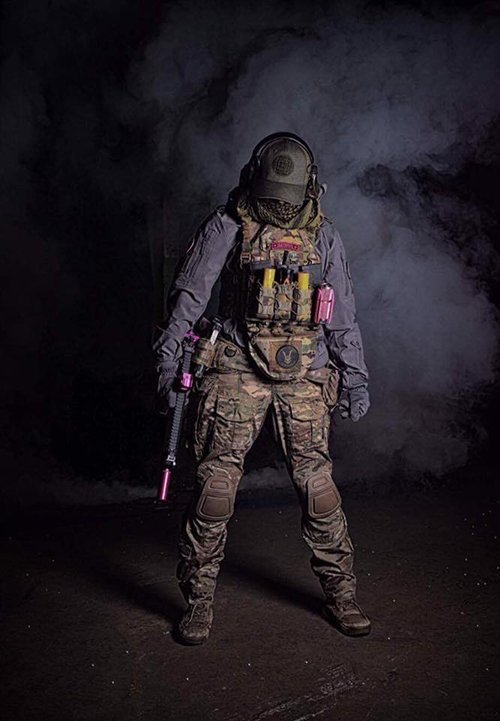 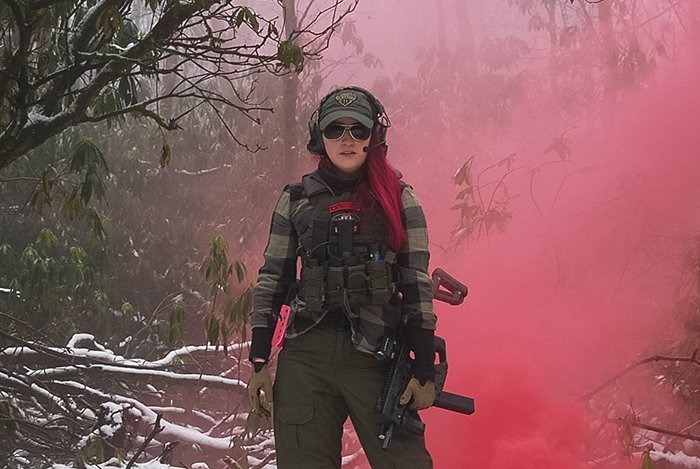